Important announcement about the discontinuation of the Clarify-it.com web sharing service. Read more

This article will show you how to connect Clarify to your WordPress blog as well as how to upload a document.

The number one cause of support issues with Clarify center around issues uploading to WordPress using the legacy xmlrpc.php interface that comes with WordPress. Historically there have been security issues with WordPress and xmlrpc interface so many web hosting providers will shut down access to it if the server detects too many requests coming from a particular IP address.

Now that you have configured your WordPress sharing account you will see a WordPress icon in the sharing toolbar. Click on it to upload your document to WordPress. 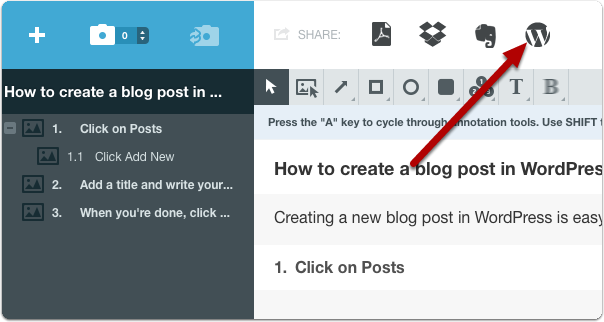 You will see this dialog when you upload the document. You can choose the blog, post type, status, and category (if applicable to the selected post type). Any tags you have assigned to the article will be assigned to the post you create in WordPress as well. 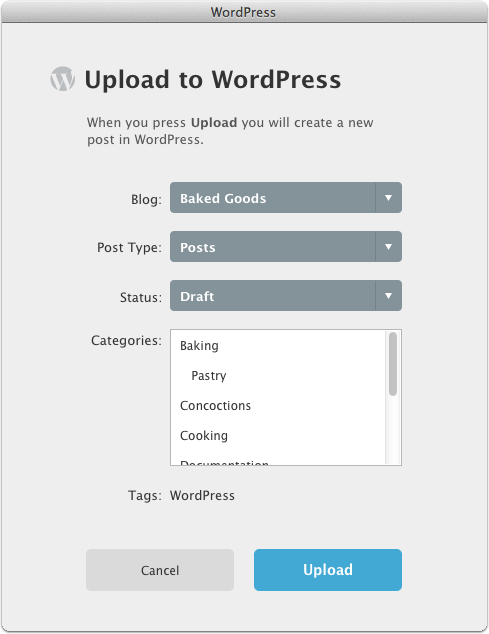 Clarify will list all of the available post types in your blog. The default choices allow you to create a Post or a Page. If you have any custom post types they will show up in the menu as well. 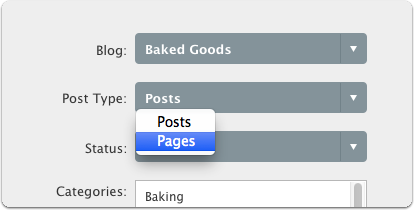 After you make your selections click the Upload button. When the upload is complete the URL to the WordPress page will be on the clipboard. 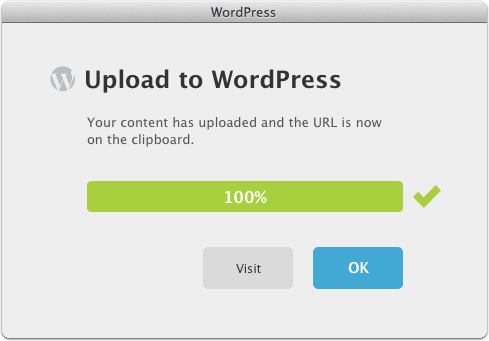 A note about updating images

The next time you upload the Clarify document to WordPress Clarify will replace the existing post. When updating an existing WordPress post Clarify tries to optimize the update process by not uploading images which have already been uploaded. If a step image has been uploaded before then it will not be uploaded again if:

If the image needs to be updated the behavior is different depending on whether you are using the xmlrpc.php url or the WP REST API pluging.

When using the WP REST API plugin the existing image on WordPress will be deleted from WordPress and a new image will be uploaded.

When using the xmlrpc.php url the exiting image on WordPress will be updated with the new image.

A couple of things to keep in mind. You should not modify any images that Clarify uploaded within WordPress itself if you plan on using Clarify to update the post later on. If you use a 3rd party WordPress plugin to replace an image in WordPress, Clarify won't know that you did and will not upload the latest image from the Clarify document. In addition, if you use WordPress to edit the image Clarify will not know that you made changes to it.

hi, great WP integration. Am I able to password protect the page I upload to WP?
Thanks

@raj - You can't specify any page settings within Clarify to password protect a page. You would need to handle that within WordPress itself.

I tried everything mentioned above but no success. I have multiple domains hosted through the same company. One domain works fine connecting with Clarify but the other does not. Unfortunately, the one that I want to connect will not connect. :/

@drfrank - can you send a screenshot of the error you are seeing when trying to connect to [email protected]?

When I type my wordpress url into the Configure WordPress box and Click Configure, it comes back with "Clarify was unable to find the wp-api or xmlrpc.php endpoints on your server"
Can you help?

@Paul - The HTML of your WordPress template isn't including some data that Clarify is looking for. Try holding down the OPTION key on OS X or ALT key on Windows when you select "WordPress" from the "+" menu. This will bypass the auto discovery feature and allow you to input your WordPress URL directly.

@Trevor - Thank you, the Option key method worked. But when I try to publish to WordPress, I get this message " An error occurred while uploading the file for step 3: uploading file (418 unused /Users/pauldel/Library/Containers/com.blue"

@Paul - looks like your hosting provider is doing something. Take a look at this web page I found that discusses a 418 error:

Hi Trevor. I have clarify working with Wordpress on one machine, but the other machine (same version 2.0.5 build 4) I get the following error. "unable to the wp-api or xmlrpc.php endpoint on the server. I was able to publish on one, but not the other. Strange.

@Matthew - try holding down the Option key (OS X) or Alt key (Windows) when selecting WordPress from the + menu. This will bypass the automatic configuration routine and you can configure WordPress by hand.

Worked like a champ. Thank you! Clarify is my go to tool!

In case it helps anyone else: I couldn't connect until I entered the HTTP version of my domain. My blog defaults to HTTPS so that's what I was entering, and I was getting an "application error".

The HTTP version worked perfectly and posts to Wordpress fine.

I'm getting an error for a failed handhake after installing API plugins. https://screencast.com/t/cZFgGdz3jws

@tq sorry, the instructions you read are for an update to Clarify that hasn't been released yet. That is why you get the error.

The instructions have been updated to the correct ones for the version you have.

Hi there,
is it possible to customize the "The WordPress upload dialog" with specific parameters? In Order to avoid that the user will select a wrong category or something like this?
kind regards
Süntke

@Suentke No, it is not possible to customize the upload dialog.

Hi there,
I have a manual theme and I would like to upload the clarify docs in those post. Is that possible? And if so, how can I achieve this?
best regards
Süntke

@Süntke - not in the current version (2.0.11). We just figured out why and have put a fix together. We will post a new version for the public at some point but if you email [email protected] we can send you a link to an update right away.

If I am using a theme that supports "courses", will the upload from Clarify to WordPress show "courses" as an option for post type?
If not, will I have problems if I copy/paste the uploaded post to a course? Will this cause issues when I try to re-upload any changes to the document?

@TKouch - the current version of Clarify doesn't support custom post types. If you email [email protected] we can send you a link to an update we are working on that does.

I can no longer get the account setup on Wordpress. After putting in the URL I get asked for a key and secret rather than username and password and can't seem to get it sorted. Anyone else had this and how do you get it working. Thanks

@Glenn - The key/secret are related to the WordPress REST API. If you go through the instructions in this article it shows how to configure Clarify to work with the REST API.